Imagine you’re managing a high street charity shop and you need more volunteers. You decide to put a blackboard outside the shop, with a message that will create a response by appealing directly to shoppers and passers-by. So you grab some chalk and you write this: 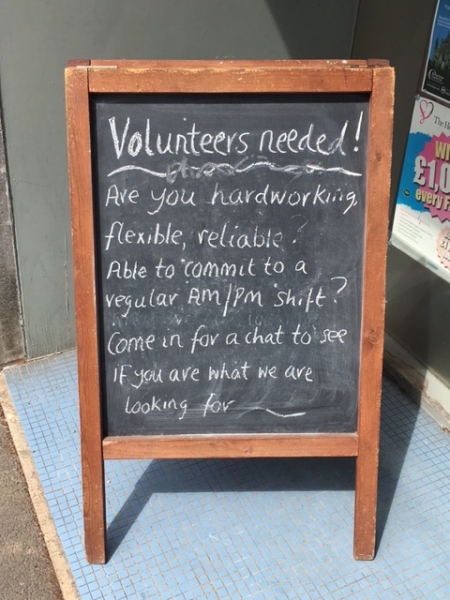 You leave the board out there for a fortnight, but you get no responses whatsoever. So you take the board in. Then a staff member suggests that different wording might create a better response, and you ask why – because you honestly don’t know how alternative wording could make any difference.

OK, time to lose the ‘you’ pronoun, because you – the person reading this right now – probably does know why this blackboard message is a poor one.

But before we rip this to shreds, let’s be fair. This message does do some things right. It attempts to grab attention with a strong, simple headline. It’s written in simple, accessible language. It seeks to connect by asking questions in ‘you’ language. And it has a call to action.

So if all these things are right, how could the message then be described as poor?

It’s because of one fundamental mistake which any professional copywriter worth their salt would never make.

In this piece, there is no evidence that the writer has made any discernible attempt to understand or appreciate their audience, ie the potential volunteer.

Any kind of message like this should be the result of research, however basic, which asks some key questions. In this instance:

What motivates people to volunteer? Is it about a commitment to a particular charity, a wish to do something worthwhile or a desire to be part of a group working for a good cause? And so on.

If you’re asking people to donate their time and talents to a cause, should you make the whole thing sound like a job application? Shouldn’t you be selling some simple benefits of being a volunteer, instead of just asking ‘are you good enough’?

If you’re reaching out to the common decency in fellow human beings, your message must be warm and inviting. You need to be pulling barriers down, not putting them up. And you certainly shouldn’t be referring to a potential volunteer as a ‘what’ instead of a ‘who’.

So let’s go back to the blank blackboard. You have 20 words to play with. What will you write to create a response and have people tripping over themselves to volunteer?

Stay in touch, with BestBits

Subscribe to BestBits for tools, tips and regular updates and developments in the world of marketing and PR.

Keep up to date with news, information and updates from the world of PR and marketing comms.

Send us a message or request a free copy check »

Is your copy easy to read? Get a free, no-obligation copy check »